Orwell’s 1984 is the Book of Our Time: A canticle for Eric Blair 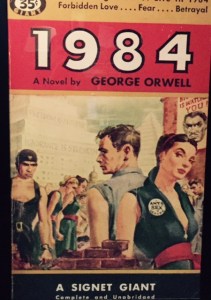 Important spirits from our past summoned their experiences, perspective, and talents to deliver  insights, blessings, and admonitions—invaluable gifts–to posterity. Homer, Shakespeare, Dickens, Hugo, Sappho, Simone De Beauvoir, Ursula Le Guin are just a few that come to mind. They used books, plays, and poems to craft messages and warnings that would be relevant for millennia. After all, the human drama is nothing if not a series of remakes and sequels. Because human group behavior is so repetitive, many such messages and warnings have the clarity of a premonition or a revelation.

I just finished reading the George Orwell (his real name was Eric Blair) classic 1984 for about the seventh time. I have read it every four or five years since I was in college and the message carries more urgency every time.  I marvel at this book and ask myself a couple of questions:

Why, in 1949, did he choose fiction (as opposed to non-fiction) to convey his message? And why did he choose a futuristic setting for this genre?

I have concluded that he chose an imaginative brand of fiction (as he did with Animal Farm) because the story structure was likely to make it accessible and acceptable to a wider audience. At the same time the message, though slightly removed in fantasy, is not so subtle as to lose impact. But the answer to the second question may better answer the first.

Orwell implies in the story that one missing component for total control by the ruling elite was technology. In past efforts at total control, that degree of power required an inefficient and disproportionate population of security forces.  But with surveillance capability (telescreens, for example), the task is made easier. In 1949, the television was not yet a home fixture, and the kind of technology Orwell imagined was decades away.

With enough of a “crisis” to justify it, we could have large drones over our heads a mile above us, or small insect-sized drones peeking in our windows; we could have our streets, our phones, emails, and computers monitored.

But my point in singing the praises of Eric Blair is that he was a journalist, an essayist, and one who had the critical experiences to be an authority. He served Imperial Britain in Burma, he fought fascist Franco in Spain, and then he witnessed the rise of Hitler and watched Stalin consolidate his own power.

That he chose to warn us about its nature and philosophy—and how technology could make it more threatening—makes the book a very timely read. With enough of a “crisis” to justify it, we could have large drones over our heads a mile above us, or small insect-sized drones peeking in our windows; we could have our streets, our phones, emails, and computers monitored.

If fascism prevailed and businesses were nationalized or controlled, there are oligarchies in banks, media companies, and energy and drug companies. These would be easily controlled or rolled-up into regional actors.

Eric Blair or more familiarly George Orwell, used the example of 1984 to show us how power thinks and works:

We owe this skilled and generous spirit and author a great debt. If Big Brother is among us–and he is always among us—and wants to control not only what we do but how we think, the tools are closer at hand today than perhaps ever before. But we can be vigilant and 1984 implies that we can obstruct the consolidation of power if we:

As Winston Smith repeats throughout the tale, the hope lies in the “proles,” or the proletariat. Unfortunately, the youngest generations today may not even know what that means or how it implies responsibility.

Read the book. Then go to dark corner and with great intention write on a piece of paper such that only you can read it.

“Down with Big Brother.”

Then wonder if anyone from the Thought Police will be able to detect that you harbor the ultimate treachery in your mind.

Sample Story from Unit One Writings: A Token of the Holly King

Orwell’s 1984 is the Book of Our Time: A canticle for Eric Blair