The Problem of Money–Part One (of Three): The Failure of Money as a Store of Value 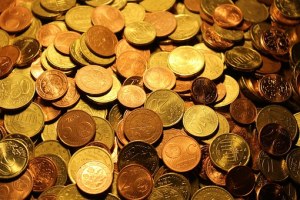 In the Economics and Finance classes I teach, the most stimulating class session covers the topic of money.

Students express a curious confusion when I introduce a specific riddle, a koan for them to mediate upon. I ask them to explain the statement:

“The prices of food, oil, gold, and property often don’t rise at all.”

They wonder if I am joking and prepare to rebut my assertion with evidence of consistent increases in the prices of just about everything.

Then they try to explain the assertion with anomalies of supply and demand. . ..  I acknowledge their contributions as valid but not what we’re looking for, and proceed.

Occasionally, a voice from the ranks comes to the collective rescue.

“The dollar went down?”

“The dollar went down!”  I affirm the epiphany and begin the debriefing:

The dollar–as with all major currencies of the world today–is a fiat currency. This means that it only has value by decree and mutual agreement. This is in contrast to a commodity currency that is “backed” by some real asset like a precious metal, or in centuries past even salt or a quantity of grain. In this situation, the currency is a more like a note that the holder may redeem for a specific quantity of whatever backs it. This practice deters too much new money creation because it requires that more of the commodity be produced before new currency can be created.

The US went off the gold standard in the ’70s. Since then, inflation has averaged about 4% per year (it was very high at first, recently much lower). There is an important debate about the need for inflation today. In truth, prices should fall due to efficiencies or “productivity gains.” But modern economists insist upon trying to “reflate” prices today with such extreme tools—unprecedented until recently–as negative interest rates and massive asset purchases (e.g. QE ) by Central Banks. The debate itself is too involved to outline here, but the case against constant inflation seems to be gathering consensus.

So for over forty years we have had a fiat currency, and in the last twenty years our Central Bank has increased the money supply 400%, and promoted excessive debt levels in both private and public sectors.

In case you need more cause to be alarmed, few people realize how close we came to a collapse of the global financial system during the 2008-9 Financial Crisis; most US banks were probably technically insolvent in 2009. There had even been talk of nationalizing the banks.

Since that event, aside from new banking regulations formed in hindsight, little has changed. In fact, Central Banks around the world seem to be more aggressive, united, and coordinated than ever in trying to stimulate growth through monetary policy and intervention in financial markets.

Okay, so where is this going?

Stay Tuned: In The Problem of Money—Part Two, I will introduce Bitcoin and related projects that were designed as improvements to the dollar as forms of “money.”

Visit Dublin, Youth and the '80s with "Sing Street"

The Problem of Money–Part One (of Three): The Failure of Money as a Store of Value