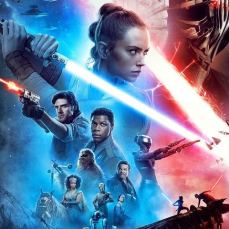 The Rise of Skywalker had a lot to live up to and mostly delivered. It had a powerful plot and an assuring conclusion, but it might be better appreciated for the relevant cultural themes than for the credulity; like its predecessors (and like the Marvel/DC franchises), each new episode has to ratchet-up the limits of the imagination in order to impress. For example, this one went farther with the concept of deus-ex machina (from Greek theatre when gods were brought down on stage) to resolve plot barriers: people are reincarnated, resurrected, or move between worlds more on a par with the Harry Potter series.

the lessons from ROS, as with its forerunners, are still there: Hope, sacrifice, and an emphasis on the noblest human qualities—the virtues—over pure might or fear.

I don’t wish to disparage the experience, however.  In a post four years ago about “The Force Awakens,” http://www.moviesmarketsandmore.com/not-long-ago-and-not-far-away/, I celebrated the importance of this cultural epic; the lessons from ROS, as with its forerunners, are still there: Hope, sacrifice, and an emphasis on the noblest human qualities—the virtues—over pure might or fear.

Daisy Ridley gave a command performance as Rey, and Adam Driver was strong as Kylo-Ren. A lot of things make sense now, despite some of the less plausible steps along the way. Is there a sense of melancholy, the same that begins to creep in about ten minutes after you close a terrific book? –Yeah.

Seasonal Re-post from Unit Three: She is Winter

"Bombshell" Explodes the Veneer on a Media Giant

Orwell’s 1984 is the Book of Our Time: A canticle for Eric Blair (Reposted)