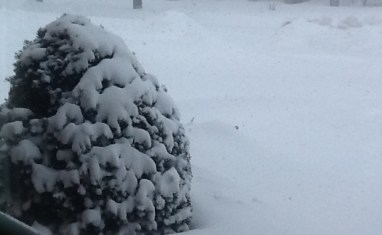 [Note: I wrote this seven or eight years ago, before I moved back. But every time it snows during the night, I am reminded of this piece.]

I am in the North for a family visit. My elderly parents manage their simple life with a grace that humbles me. They could be threatened by the simplest acts. My minor setbacks would be their calamities: a fall, the flu, a minor accident driving to the store.

Today they were mirthful and sweet and I could not decide if they were revisiting childhood or auditioning to become angels.

Today they were mirthful and sweet and I could not decide if they were revisiting childhood or auditioning to become angels.

Last month, I watched the movie “Amour,” an intense look at a couple managing change after half a century of life together (they managed it as one). Since I am not a filmmaker, but more a writer, I would display what I witness here, in the North, with the images formed of words, and my title would be “Grace.”

It is supposed to snow tonight.

Perhaps part of the same storm system that brought a rogue snow to the desert yesterday has been moving steadily northeast. Here and for them, snow changes things. What was for most in the Phoenix area a mere amusement is here a catalyst.

I can only convey my mood in images formed of words…

…and I imagine the red brick house, a mere silhouette in the thickest hours of the night. An amber half-moon is a lidded eye through the clouds as the first flakes arrive. Soon there is no border between heaven and earth. Downy fluffs of sky twirl and float and settle upon the houses, the flora and the land around them. Before dawn, all is covered in innocence. We awaken to white.

Snow, like grace, falls from heaven and floats to earth.

It's Playoff Time--Here Are Six Movies to Consider!

The Curse of the 80-year Cycle