Make Room in Your Schedule to See “Room” (Movie Review) 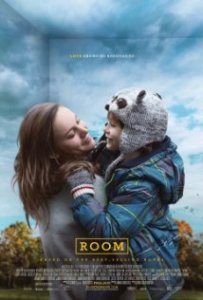 The movie “Room” is going to win its share of awards at the Oscars. If it were named Best Picture, I would not be surprised–nor would I disapprove. It has already won prizes at the Golden Globes and the Critics Choice Awards (to name only two). It’s exactly the kind of independent movie I love: it’s relatively simple, thought-provoking, inspiring, and balanced: at once sweet and somber.
There’s a long-haired five-year-old boy, Jack, who has never seen the outside of a fortified garden shed. His only experience of the outside world is the sky through a skylight, and his mother’s explanations of the images on a cheap TV.

In an early scene, Jack begins his day by greeting the fixtures. “Good morning sink, good morning, wardrobe, good morning skylight…”  He and his mother refer to their world as “Room.”  If you imagine them saying “Home,” you approach the meaning–but not quite.
Brie Larson has already won several awards for her role as Jack’s mother “Ma.” She may win Best Actress. One part of the film takes place in Room, where she has been a captive since she was abducted at seventeen.

And where she bore her son at nineteen.

It’s not until later that the film gives its audience a heavy dose of perspective. Jack is confronted with the very disorienting reality that outside of Room there exists a very strange and confusing place called the World. It is infinitely larger, has too many new and strange people, and can seem very, very, bright for one who always lived indoors.

At one point, after spending time trying to adjust to a severely expanded sense of reality–family, pets, friends, celebrity and the World–Jack wants to know if he can visit Room. The visit is arranged. His innocence still intact, Jack follows Ma past the broken metal door into Room–which is now a crime scene–and wishes they could close the heavy door–it was never, ever open in Room. They can’t close it.  So he perseveres and prepares to take his leave.

"Youth" is a Trip to the Spa

Make Room in Your Schedule to See “Room” (Movie Review)