Hello, My Name is Doris (Review) 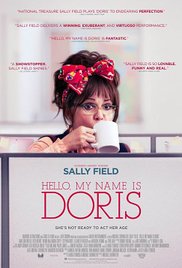 Sally Field is as charming as she’s ever been, even when she’s playing someone who has her not-so-charming moments. Hello, My Name is Doris is a worthy little independent film about a 60-something single woman who bursts out of her shell and her sheltered world when she forms and feeds a crush on a new employee at work. “John” is at least young enough to be her son, but he’s authentic enough to show her some attention. Because Doris is hyped-up on a steady diet of romance novels, her imagination is working overtime with every interaction they have: she’s a kind of “Dona” Quixote and John her “Dulcineo.”

The supporting cast does well enough, but Tyne Daly, in the role of a best friend, stands out among them and acts as ballast for Sally Fields’ strong performance. Of particular interest is Doris’ sense of style and wardrobe–a senior fashion statement if there ever was one.

While “Doris” explores a number of compelling themes–hoarding, motivational speakers, and the lonely aged living among us, it fails to complete any of them. Like the main character, the movie has some flaws, but makes you want to be fond of it. The film is really just a chance to watch Sally Field once again mesmerize an audience with the expressive eyes and smile that reassure us that people are good and that it’s okay to lead with your heart. I suspect an Oscar nomination looming for Fields, but that would likely be all the film would garner.

Sample Story from Unit One Writings: A Token of the Holly King

Did Panama Just Have an Earthquake?

Hello, My Name is Doris (Review)