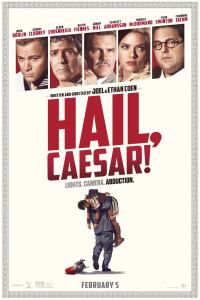 Hail, Caesar, the new Coen Brothers film, is not so much a story to enjoy as it is an experience to savor. I marvel at how in each their films the setting, costumes, and characters (actors) are impeccable. Every scene is a sublime creation. I am trying to convey the idea that you could get more from this film if you simply relish the marvel and spectacle of each scene rather than wait for some larger impact. It is not unlike walking through a gallery of masterworks; you pause before each one, feeling awe before the highest levels of Art and craft. If someone asks you later what you thought, you are likely to describe the effects on you of specific artists (or periods or styles) rather than offer some unifying response. Same thing with Hail, Caesar.

Josh Brolin and George Clooney, Ray Fiennes, Scarlet Johansson, Tilda Swinton, and Channing Tatum all bring the goods in this. A newcomer, Alden Ehrenreich is especially good as a cowboy star. The acting is flawless.

For me, the bigger question for this movie is why they chose the story they did. My immediate take was that the target environment was especially rich for the wry humor of these directors. After all, it is set in 1950s Hollywood (In case you haven’t noticed, this is about the fourth major movie in the last year that takes place in the 1950s). My second reaction was that they never meant to go mining for meaning in the studios of Hollywood past, but a chance to make the scenes behind the scenes was too irresistible.

The takes from various productions in progress at the studio–live action and rushes–are fabulous and the characters (the actors) all seem to be something else off-screen. While the humor is not dark as it was in Fargo, it is dry and absurd and so refined that some of it might be missed. The film is funny, although it comes close to merely representing the zany studio life in ‘50s Hollywood with a few of the less amusing scenes screened out.

Plot? The main theme is the disruption in the filming of the big studio project, Hail Caesar, caused by the sudden absence of leading man and Hollywood star Baird Whitlock (George Clooney). But because the story covers a week or so in the life of studio exec Eddie Mannix (Josh Brolin), there are multiple films in progress and thus multiple plots. The real theme is whether Eddie Mannix will leave show business for a more secure job in corporate America. Yet no one theme really drives the film. That’s because what happens behind the scenes is incidental. In Hollywood, only the Silver Screen matters–that’s the reality that supersedes all others.

And as everyone knows, the show must go on.

Popcorn is a Sacred Food

Where to Invade Next (Review)